I picked up a lovely book today from a waiting room table.  It depicted the many unsigned, yet obvious, Banksy graffiti artworks.  I hadn’t seen them before.  The little boys with their buckets and spades, seemingly having snuck through a big gaping hole in the Palestine wall, from Paradise, in to rubble.  Or were they digging through from the dust to the sand?

The one I was drawn to was of a little girl holding a bunch of balloons that were lifting her up to where she gazed, the top of the Palestine wall.  I could sense her hope and desperation of her reach.

I remember reading, very early on, after my world collapsed and I sat in shock, buried in the rubble, my mind clouded with the dust, that sometimes certain things have to be demolished in order to be rebuilt again better, stronger, refreshed, modernised.  I didn’t quite believe it at the time.  But I do now.

And now I wonder, can marriage become like a wall that needs to broken down?

Was the Big Man the little boy, looking for Paradise on the other side of the wall?  And as he did so, he brought the wall down, and despite the pain of the collapse, he allowed for fresh air and freedom to recreate.

And am I, was I the little girl, desperately clinging on to my 8 balloons named hope, love, gratitude, positivity, joy, peace, dreams and belief to help lift me out from behind the wall up and out in to the fresh air and freedom?

The sharp pieces of the debris may have burst my balloons and buried him, and we may have lain in the rubble for a while, but we were and are together.  We have cleared the mess up together, working diligently and tirelessly to do so and to create our future Paradise, this time without any walls.

A I returned home, to further news of devastation in our communities, I wondered again.  I wondered if all this economic upset, nationally, internationally and between races and faiths, is going to bring down the ‘marriage’ walls of politics and faith and allow fresh air and freedom.

As with all collapse, it is painful and you can’t see your way out, or how the future will shape up.  But there is  always the first balloon.  Hope. 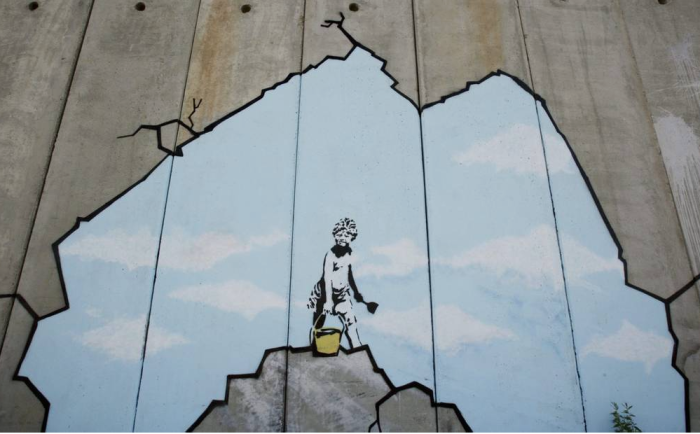