Today, I did what I had been intending to do all week and make a start on another chapter of my book.  The initial words came to me in the early hours of the morning, waking me up.   I love how they do that… but it is only when I sit down to write, does the rest of it flow.  I am not sure where it comes from. I don’t even think it is my brain that is writing… my fingers just flow and the words end up on the screen.

In completing those first few sentences that flew across my consciousness this morning, so much more came out.  And I really liked what I had to say…

There comes a time, when you have to start moving forward and looking ahead, rather than revisiting the past or replaying the painful showreel of the trauma that devastated you.

This will take time.  But as with anything, it is the first step that counts.  It is the decision to focus more on what you want the next chapter to be.  And sometimes, this may be how you are going to start a new book. Either way, it is intention here that counts.

Eventually, you will find that you are at a natural ending.  The full stop at the end of the last sentence will mean so much.  Closure.  And you are finally free to move on.  It may end up being something you do with absolute consciousness or you may find that it happened and you didn’t even notice, you just recognise the feeling of peace.

Looking back now, it is obvious to see what have been chapters in my life and what has been a book.  My childhood was a book, with many happy chapters of each age group, school and university, friends and family the main players of the story.

My young adulthood has been another book.  The chapters in this book have been more varied and have contained multiple parts or sub-books.  One for my career and work, with chapters on management consultancy in big firms, small firms and for myself, working in industry and then starting my own network marketing business.  Another part for my family, where chapters show the transition from one to another, the creation of new life and ultimately, the loss of life of those you love.  The last part reflects my one significant relationship, with chapters on getting serious, marriage and the honeymoon period, 2 becoming 4, the juggling act and the final collapse.

Each of the chapters ran their course and came to natural endings.  And so did the books.

I remember feeling that I would never be able to end the chapter on my marriage.  I wasn’t ready to close the book on my young adulthood, my youth, my naivety.  I lived it, re-lived it and felt stuck in the depths of the oceans of despair and depression.  But while I was stuck in that chapter, I knew I couldn’t move on to the subsequent chapters.  I could see the blank pages of what could come next but I was too frightened to put pen to paper for fear of making the wrong decision.

I am a strong believer that emotions should not be squashed or pushed down, avoided or ignored.  All the feelings had a place in this final part of the book and they had to be endured.  If I tried to end the chapters too quickly, I would find myself re-reading the pages, stuck and unhappy, lost and lonely, angry and frustrated.

In the end, I kept the last chapter open, but started to draft the next book.  It had to be a book.  The only way to move on with my life was to write the epilogue and end the book.  I knew I had to write the final page and bind it together in leather and put on a bookshelf to get dusty. But first I had to start the prologue of the next book of my life.  It took courage and imagination.  Courage to believe that my life could be a better version than it was in the present.  Imagination because it had to be different to anything I had done before.  I had to draw a line under the marriage, the life we had, where we lived, what I did, my business and everything associated to it.  Anything that triggered a memory and through me back in to a post traumatic state, needed to be gently and firmly written out.  Only the key players and positive influences would be taken forward into the next book.

The two chapters were interwoven.  And eventually, when the prologue was written, I could completer the epilogue of the last.  I didn’t realise that that is exactly what I had done, until this moment. 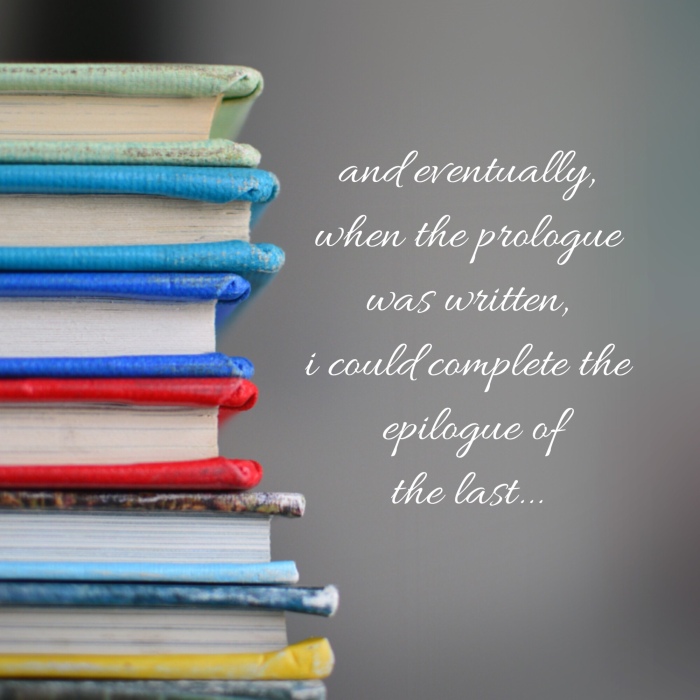