Everything is won and lost in the mind.

A week ago, I recognised my freedom from the madness of my mind being controlled by the words, thoughts, feelings, rants, judgements and images of another woman.  She had been occupying my mind for so long and just as she had been an addiction for him, she had become an addiction for me.  And just as he had weaned himself off, so had I.  And just as he became his true self again, so had I.  Without her taking residence in my cerebral cortex, with the occupation over, the battle of my mind was won over by my heart and the hard work of the heart of the Big Man.

And yet, here I am occupied again.  A different occupation.  One in my body but which has also instigated the next battle in my mind.  A hard lump of ‘dense tissue’.  And while the positive army loudly fights for the fact it is just that, the negative side is marching determinedly for the side of the inconclusive cell results.  And the longer I wait, the mind battle rages.

There are parallels that run through the two different occupations.

The same vulnerability I had a year ago sets in; I feel exposed and weak. I want to hibernate and hide. And at the same time, be distracted and live and laugh.

The feeling that I deserved it for being so ridiculously trusting, for my unconscious denial, total gullibility and ability to delude myself is the same feeling that I deserve this occupation for the fact I have held on to anger and hatred for too long.  The Dis-‘ease’ causing a ‘disease’ in my body…. That feeling again that it was all my fault.

The uncertainty, the not knowing.  That’s what kills me, just as it did before.

I have just survived the biggest mental battle of my life and I feel pissed that I haven’t even had the chance to catch my breath and enjoy the beauty of the peace and quiet before the next one threatens.

Yet deep down, I know this will all be fine.  A temporary madness and fleeting occupation.  This isn’t a trauma, it’s just a one off drama. And perhaps it is just the same emotions and parallels being re-fired up after being put to rest so recently that is causing me so much angst.

My sister in law, my dearest friend sent me a picture to help me through the last war and they serve me again this time. 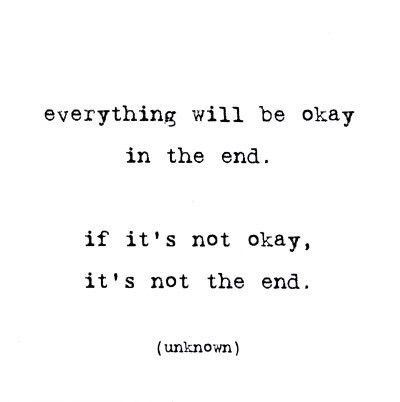