The brain.. So powerful.

The brain plus perception.  Even more so.

And while I have been reading up on the theory of the brain, how powerful the brain is on our thoughts, beliefs and therefore actions and results in terms of happiness and ultimately success, today I experienced this practically.

It all happened in the ‘house of cornfusion’.  (The corn is a play on words as we were in a corn maize maze and play park.)

It was so clever!  And while the boys ran ahead, their innocent brains just exploring and laughing at the wonky rooms, spinning tunnels, mirrored walls, my brain polluted by life and experience, made my body do weird things.

I have always suffered from a mild form of vertigo, can’t handle heights, cliffs or stairs without bannisters. As we walked through the black curtains and immediately stepped on to a bridge that was across a floor-less room, my whole body went in to crouch mode and I grabbed for the children out of instinct, pulling them away from the simple wooden rails for fear they would fall and die.  Half way across, I managed to look over the edge and even after I knew it was just mirrors, reflecting in to infinity, my legs were still jelly.

The wonky room!  It was just a sloping floor but it felt like gravity was pushing me down, down, down as if the room was on its side.  Again my body couldn’t fathom it, reacting only based on what it new, what it saw, rather than based on fact.  I felt drunk!  Couldn’t stop giggling, stumbling and being pinned to the wall no matter how hard I tried to walk…

But the strongest reaction was in the spinning tunnel.  As I peered in, I could see a bridge leading through a  spinning tunnel covered in fairy lights.  I was totally taken by surprise by the response of my entire body….As I stepped in to the tube, my legs gave way and I fell to one side and was pinned to the metal railings and I couldn’t move.  Clinging on to dear life!  My friend ahead was laughing but then realised I was in trouble… and so was Willy in front of me…  It was dark and he was confused.  If it hadn’t been for him, I would still be stuck there, dizzy, immobile, clinging on for dear life, dazed like a deer in the headlamps.

“THE BRIDGE ISN’T MOVING” I screamed silently in my head, then out loud and over again, closed my eyes to shut out the spinning until I got to Willy and pushed him through to the other side.

As soon as I stepped off. I was totally fine.

My brain made my body respond based on what it perceived to be true, but not based on fact.

It was an absolutely practical depiction of what I have been reading on the power of the brain, how to rewire it.  Perception can be seen from both angles and can lead to totally different results.  Perception can be based on fact or fiction, reality or imagination, smoke and mirrors, science or magic.

And it all boils down to choice.  Is your reality based on choosing fact or fiction?  And if you want a different reality, can you choose to see things differently?  Can you re-wire your brain to believe what is real when it perceives reality to be something different?

I know in the last month, I have been working hard daily on my thoughts and beliefs and I can see my reality changing daily.  The results speak for themselves in terms of my attitude, my happiness, my health, my stress levels….

And a good friend to laugh with when you perceive things wrong! 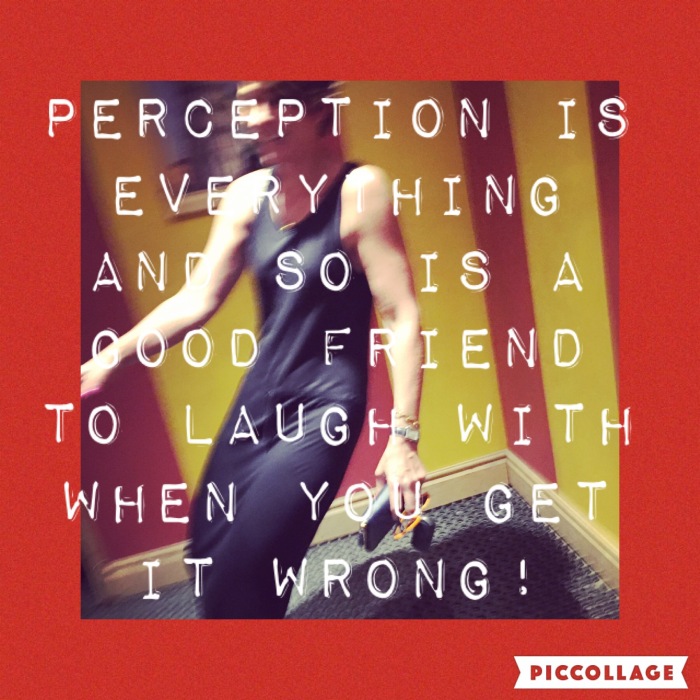